What are invasive species?

According to NOAA, an invasive species is an organism that causes ecological or economic harm in a new environment where it is not native. These species are capable of causing extinction of native plants and animals, compete with native organisms for limited resources, altering habitats as well as reducing biodiversity.

One example of an invasive species is the Lionfish or also known as the Zebrafish. It is threatening native fish that has taken over in the U.S Atlantic coastal waters.

Below is a great little introduction video to what my blog post will be discussing.

“Divers Fight the Invasive Lionfish | National Geographic” by Youtube under CC by 2.0

Lionfish belong in the Scorpaenidae family. Commonly called scorpionfishes, the family includes approximately 500 different species. The genus name “Pterois” is from the Ancient Greek word for “feathered” or “winged” which are named after their physical appearance. 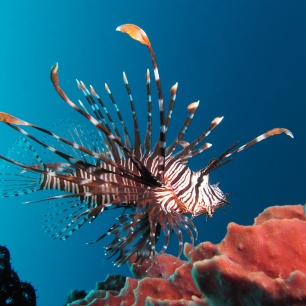 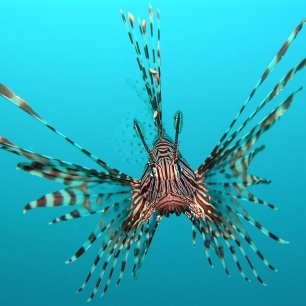 “Red lionfish near Gilli Banta Island” and Pterois  by Wikimedia Commons  under CC by 2.0

The beauty of the lionfish might fool you. They are actually skilled predators capable of eating any fish or invertebrate that will fit in their mouths. Not only can these predators capture most fish, but they have venomous spines that can cause serious injury to people.

The venom is made of a protein combination of a neuromuscular toxin and acetylcholine, a neurotransmitter. This venom can be denatured by either applying heat or freezing it.

Native Range: The Lionfish normally live in the South Pacific and Indian Oceans. Living in the reefs and rocky crevices, however they have found their way into warm ocean habitats all over the world. Now these species are established all throughout the southeast coast of the U.S., the Caribbean, and even parts of the Gulf of Mexico.

Since the early 1990’s divers and researchers have been unexpectedly finding these species in parts of the world where they do not belong. The first lionfish recorded in the Western Atlantic was a specimen captured near Dania, Florida in 1985. No other lionfish sightings were reported until 1992. The most likely source of these fish was the home aquarium trade.

At first, the spread of the lionfish population was rather gradual, but in 2000 the number of sightings began to increase exponentially. By 2009, lionfish were pretty well established along the Atlantic coast and throughout the Caribbean.

In 2010, sightings were also recorded in the northwestern Gulf of Mexico, along the coasts of Alabama, Mississippi and Louisiana. In July 2011, the first lionfish was observed in the sanctuary, at Stetson Bank.

Lionfish an extremely prolific invasive species in TCI, throughout the Caribbean and many places in the Atlantic.… twitter.com/i/web/status/8…—
Karen Cangialosi (@karencang) March 21, 2017

Figure: The progression of Lionfish invasion from 1985 to 2014

Why are lionfish a growing problem in the Atlantic Ocean?

Lionfish have been taking over the Atlantic ocean at an extremely fast rate scaring researchers. This invasive species has the potential to harm the whole reef ecosystem since it considered a top predator. This is because the lionfish are known as indiscriminate eaters. If it will fit in their mouth they will eat it. They have uncontrollable appetites and consume dozens of organisms in one feeding. This drastically reduces the other fish populations and ultimately alters the delicate reef ecosystem. This can include many small species of fish and invertebrates that keep algae in check on the reef. Scientists are worried that if lionfish kill off the majority of algae-eating species such as parrotfish, it will allow the seaweed to take over the reef. Not only does it include small animals but many important fish species like snapper and grouper. With this high rate of consumption of these spices it can affect the ecological balance of the reef system as well as impact the fisheries. This invasive species competes for food and space with the other overfished native stocks.

A lionfish’s stomach can expand up to 30 times it’s normal volume. It has been found that lionfish can eat prey just over 1/2 its own body size as long as it can get its mouth around the prey. Photos of this can be seen here. A single small lionfish may reduce the number of juvenile native fish on any given reef by approximately 79% in just 5 weeks! Recently, a lionfish was found to have over 60 prey in its stomach. Controlled studies have shown that a lionfish can go up to at least 3 months or longer without eating and only lose 10% of their body mass.

Another reason why the growing population of lionfish is concerning is due to their reproduction. Lionfish have no known predators and can reproduce all year long. Female lionfish will release eggs when they are approximately one year old. They can release between 10,000 and 30,000 unfertilized eggs every 4 days year around, approximately 2 MILLION eggs per year in warm waters, but possibly only spawn 3-4 months a year in cold years. This is a concerning finding since they have moved into warmer waters. It has also been reported that the eggs contains a chemical deterrent that warns out other fish from eating these eggs. The egg sacs and larvae are then easily distributed by the ocean currents. Once the lionfish have an established territory they tend not to travel far from their home. With the lionfishs ability to consume a tremendous amount of fish, able to reproduce so frequently and the adaptation to not move once settle are three main reasons why scientists are worried these species will take over and destroy one of the most important ecosystems in our world. Now that scientists understand what is happening they are trying to take approaches to control this population of species.

Below is another video depicting the problem these species present:

“Your Earth is Blue: Lionfish – Terror of the Coral Reefs, Part 1” by Youtube under CC by 2.0

Experts all agree that is unlikely that they will ever be able to completely eliminate the lionfish population from the Atlantic Ocean. Right now their priority is to minimize the impacts of the lionfish. At this time, there are policies in place to remove any lionfish encountered. This strategic tactic has been shown to be an effective control measure. Until nature finds a way to reach some balance this has been the most effective way to tackle this problem.

Most of the lionfish removed from the sanctuary are dissected and examined as part of ongoing research to learn more about invasive lionfish populations. Fishing derbies have also been used in an attempt to catch more of the lionfish.

***To report a sighting, please submit a Lionfish Sighting Report Form (390kb pdf) or send an email, along with any photos, to flowergarden@noaa.gov

This work is licensed under a Creative Commons Attribution 4.0 International License.

A glimpse into my life